COMIC: MORIARTY COMING IN MAY 2011 FROM IMAGE 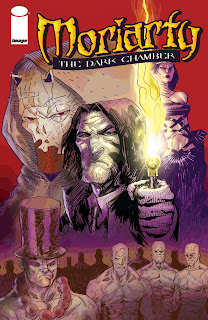 IMAGINE A WORLD WITHOUT SHERLOCK

Berkeley, CA - February 22, 2011 - Image Comics presents another new title as well as some exciting new talent with MORIARTY, a collaboration from the up and coming creative team of writer Daniel Corey and artist Anthony Diecidue. This new series, set to debut in May, will follow the world’s greatest criminal mastermind as he adjusts to life without a foil.

Although the venerable series created by Sir Arthur Conan Doyle covered a great deal of ground, it left one question unanswered: What would happen if Professor Moriarty finally achieved mortal victory over his ages old nemesis? With Diecidue's art evoking the dark and foreboding atmosphere of London after dark, Corey will show readers how he imagines the story without a Sherlock Holmes.

“Would Moriarty revel in victory, spend the rest of his life smoking cigars and sleeping on stacks of money?” Daniel Corey wondered. “Probably not. I think he’d fall on hard times, and it would take one heck of an event - say, a World War - to jolt him back to life.”

Corey continued, "Moriarty's not an evil person - not in his own mind. In working with Anthony Diecidue to create this series, I thought we’d take a look at things from Moriarty’s perspective, get to know his thoughts. Along the way, we could see him delve into some mind-blowing deductive reasoning, get into a few sword fights, decipher riddles and discover technology 50 years ahead of its time. Would we expect any less from the original super-villain?"

For an interview with writer Daniel Corey, in which he discusses MORIARTY, visit the Unsung Heroes blog by clicking here. Includes background details and page samples from MORIARTY.
Posted by Charles Prepolec at 10:56 AM 1 comment: