BOOK: KIM NEWMAN'S PROFESSOR MORIARTY: THE HOUND OF THE D'UBERVILLES 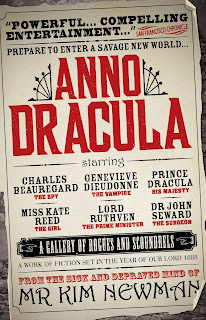 
This volume features all of Kim's Moriarty and Moran novellas and stories that have appeared to date, as well as at least three entirely new pieces, but presents them in a serial novel form as a continuing narrative with a connecting thread. Presented as a series of memoirs starting with his initial meeting with the Napoleon of Crime, Professor James Moriarty, Colonel Sebastian 'Basher' Moran relates seven interlinked tales of their adventures, often mirroring certain Sherlock Holmes stories, culminating with the fateful event at Reichenbach Falls. Moran fills his stories with a sly, bawdy and caddish humor, often reminiscent in tone to George MacDonald Fraser's FLASHMAN, that makes this an incredibly charming and engaging read from start to finish. Adding to the fun, like Kim Newman's ANNO DRACULA and DIOGENES CLUB stories, you'll find loads of references to other literary and film characters.

Imagine the twisted evil twins of Holmes and Watson and you have the dangerous duo of Prof. James Moriarty - wily, snake- like, fiercely intelligent, unpredictable - and Colonel Sebastian 'Basher' Moran - violent,politically incorrect, debauched. Together they run London crime, owning police and criminals alike. Unravelling mysteries -- all for their own gain. 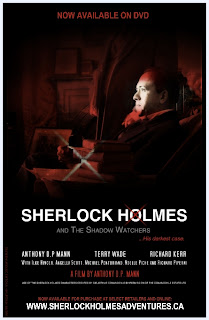 Anthony D. P. Mann's indie Canadian Sherlock Holmes film SHERLOCK HOLMES AND THE SHADOW WATCHERS is now complete. A World Premiere screening is scheduled for April 6th, 2011 at 7:00PM, at the EMPIRE THEATRE in Kingston, Ontario. The film is expected to be released on DVD sometime in May 2011 and will be available to order via the production's website: www.sherlockholmesadventures.ca

A recent promo video for the upcoming Kingston screening below:


The sensational details of a gruesome murder in The Daily Gazette have London in a panic, as a blood-thirsty madman - more vicious than Jack the Ripper - preys upon the city. Of greater concern to Scotland Yard, however, is that the account of the murder was published nearly two hours prior to the crime having been committed!
Sherlock Holmes and Dr. Watson – the Great Detective and his faithful assistant and chronicler – find themselves challenged with one of their most baffling cases - “The Case of the Woman Who Was Murdered Tomorrow”!
Will an innocent man be sent to the gallows?
How much blood will be shed before a scarred fiend is brought to justice?
…And who are the mysterious Shadow Watchers, a coven of ominous figures who orchestrate terror from within the darkness?
Starring Anthony D.P. Mann as Holmes and Terry Wade as Dr. Watson, “Sherlock Holmes and the Shadow Watchers” is a horrifying new adventure, produced with the kind permission of the Conan Doyle Estate.
The trailer for SHERLOCK HOLMES AND THE SHADOW WATCHERS:

Posted by Charles Prepolec at 11:03 AM No comments: