"Science seeks knowledge! Let the knowledge lead us where it will, we still must seek it! To know once and for all what we are, why we are, where we are, is that not in itself the greatest of all human aspirations?" – Professor G. E. Challenger, When the World Screamed 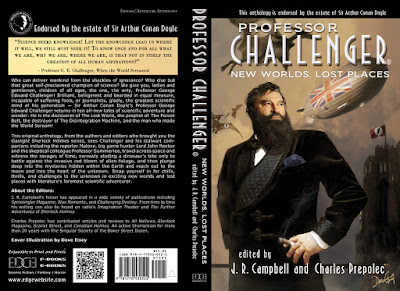 Brilliant, belligerent and bearded in equal measure, incapable of suffering fools, or journalists, gladly, the greatest scientific mind of his generation - Sir Arthur Conan Doyle’s Professor George Edward Challenger returns in ten all-new tales of scientific adventure and wonder. He is the discoverer of The Lost World, the prophet of The Poison Belt, the destroyer of The Disintegration Machine, and the man who made the World Scream! Who can deliver mankind from the shackles of ignorance? Who else but that great self-proclaimed champion
of science? We give you, ladies and gentlemen, children of all ages, the one, the only, Professor George Edward Challenger!

This original anthology, from the authors and editors who brought you the Gaslight Sherlock Holmes series, sees Challenger and his stalwart companions including the reporter Malone, big game hunter Lord John Roxton and the skeptical colleague Professor Summerlee, travel across space and witness the ravages of time, narrowly eluding a dinosaur’s bite only to battle against the invasive red bloom of alien foliage, and then plunge deep into the mysteries hidden within the Earth and reach out to the moon and into the heart of the unknown. Strap yourself in for chills, thrills, and challenges to the unknown in exciting new worlds and lost places with literature’s foremost scientific adventurer.

"The whole matter is very fully and lucidly discussed in my forthcoming volume upon the earth, which I may describe with all due modesty as one of the epoch-making books of the world's history."
– Professor G. E. Challenger, When the World Screamed

"Hind and Horn" by Wendy N. Wagner
"The Shug Monkey" by Stephen Volk
"The Crystal Minders" by John Takis
"King of the Moon" by Lawrence C. Connolly
"The Dinner Party" by J. R. Campbell
"The Fool's Sea" by Simon Kurt Unsworth
"The Eye of the Devil" by Mark Morris
"Professor Challenger & The Crimson Wonder" by Guy Adams & James Goss
"Time's Black Gulf" by Josh Reynolds
"Out of the Depths" by Andrew J. Wilson