Jô Soares' 1995 Portuguese language pastiche O Xangô de Baker Street (released in English as A Samba for Sherlock in 1997) has now been turned into a feature film by Sky Light Cinema Foto e Art Ltd with distribution handled by Columbia TriStar Films of Brazil. While the translated pastiche has generally been panned by English speaking Sherlockians, the author,  Jô Soares, and the book itself, are wildly popular in Brazil. Soares, a celebrated wit and cultural icon in his native land, even makes a cameo appearance as an Appeals Court Judge in this film version of his novel. The film was chosen to open the Rio Festival and went into general release on October 26, 2001 in Brazil.

Cast in the key role of Sherlock Holmes is Portuguese actor Joaquim de Almeida (possibly best known to North American audiences for his portrayal of the villain 'Bucho' in the Antonio Banderas vehicle (Desperado).  Anthony O'Donnell is appearing as Dr. John Watson. Also in the cast is Maria de Medeiros (Pulp Fiction) as the French diva Sarah Bernhardt. The film was shot over a 12 week schedule on location in London, Rio De Janeiro and Portugal. 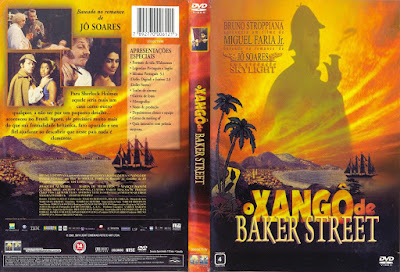 Set in Rio de Janeiro in 1886, this comedy-thriller begins with the theft of a Stradivarius violin that has been presented by His Majesty the Emperor of Brazil to one of his more delectable mistresses--a harmless crime in itself but one that mystifies the authorities and (far more important) embarrasses the Emperor. At the suggestion of Sarah Bernhardt, who is on a triumphant tour through South America, the great Sherlock Holmes is summoned from London to solve the case. But by the time he arrives, events have taken a turn for the worse, as a series of grisly murders shocks the city--the victims all beautiful young women. In each case, the killer leaves his calling card: a violin string entangled in the woman's pubic hair, the corpse stripped of a flap of skin.

Holmes (and Dr. Watson, of course) are immediately off on the track of the killer, but although Sherlock succeeds in coining the term "serial killer," his celebrated powers of deduction don't get him very far with the case itself: overcome by the charm of the tropics, some spectacular digestive difficulties, and the strong appeal of a pretty young actress--at thirty-two, he's not exactly a sexual virtuoso--Sherlock finds himself in a thicker fog than he ever encountered back home in London.

And in dark counterpoint to Holmes's questionable ratiocinations and the novel's brilliantly re-created texture of nineteenth-century literary, social, and low-life Rio, is the chilling yet hypnotic voice of the killer himself, a monster of intelligence, evil, and ever-spreading fame. . .
(Note: Synopsis refers to the novel)

2001 saw the very successful theatrical release of O Xangô de Baker Street in South America. The film has now been given a gorgeous Region 4 DVD (NTSC) release with English subtitles making it accessible to English language speakers with region free or multi-region DVD players. (note: this DVD will NOT play on standard North American or European DVD players. You must have multi-region capability to play this disc!)

If you thought Sherlock: Case of Evil was “out there” wait’ll you get a load of this beauty! Sure the Canonical Holmes is nowhere to be found in O Xangô de Baker Street, based as it is on the pastiche/parody novel by Jo Soares (released in English as A Samba for Sherlock), but the film has bags of quirky charm. While most Sherlockians (myself included) have firmly placed the book on their least favorite pastiche list (I am being kind in that description), the film, while still remarkably faithful to the novel, is a surprisingly fun romp placing Holmes on the trail of a serial killer (a phrase that Holmes coins in the film) in 1886 Rio de Janeiro. The transition from printed word to screen appears to have mellowed the most objectionable elements of the novel for me, which is to say that I find it easier to deal with the sexually naïve Holmes fumbling through foreplay on screen than having to read graphic textual depictions. One is also not encumbered by awkward dialogue that suffered in the translation from Portuguese to English. Sure Holmes still exhibits some bizarre behaviour after being introduced to cannabis by his new lady-love, suffers from explosive digestive issues and engages in more than one sexually charged encounter, but it all has a light nudge-nudge-wink-wink feel in the hands of director Miguel Faria Jr.

Now don’t get me wrong, this is not some sort of Sherlockian sex/dope comedy, as a string of grisly murders ala Jack the Ripper are at the heart of the mystery and are all presented on-screen in their full ghastly glory, but the film reflects a different cultural sensibility than one would find in a North American release and manages to maintain a remarkable balance between black humor, toilet humor and murder mystery thriller. So, if explosive bowel movements, nudity, and a dope-smoking Holmes offends, steer clear of this one.  However, if you can get beyond the obvious physical silliness and toilet humor, you’ll find a fairly engaging mystery and a beautifully shot film with some very pleasing moments. 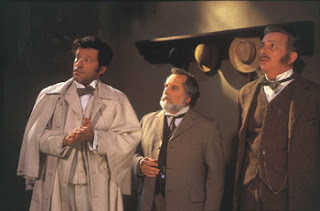 The cast makes marvelous work of the uneven script. Maria De Madeiros (Pulp Fiction, Henry and June) sets the stage with her delightful Sarah Bernhardt. Holmes as played by Joaquim de Almeida (Desperado, 24) is a bit of a pompous ass at times, who inexplicably has Holmes displaying a remarkable clumsiness. While it is a relatively straight performance (as straight as this material allows), Almeida does tend to let tongue drift to cheek from time to time. While chronic clumsiness and unbelievably wrong deductions are the hallmark of the characterization, I still found this Holmes more to my liking than many other recent screen incarnations. Watson, as played by Anthony O’Donnell however, is comic foil from start to finish, particularly during his demonic possession (?!?) sequence.  While neither Almeida nor O’Donnell look particularly like the characters they are playing, there is a good deal of warm affection for their characters in their respective portrayals, which makes up for a lot. The supporting cast give top-notch performances across the board, with no one missing a beat, but the stand-out performance comes from Marco Nannini as the much set upon and highly sympathetic Inspector Mello Pimento. As in the novel, this character could effectively have carried the plot through without an appearance by Holmes, but their mutual respect for each other works well on screen and Pimento serves as more of a partner in the investigations than the typical Lestrade figure normally would.

In a welcome move, the characters of Holmes and Watson always speak English to one another, so their dialogue is not subtitled, but all non-English speakers are effectively sub-titled throughout. This approach really brings home the cosmopolitan feel of the Rio de Janeiro setting. Speaking of which, the location footage is gorgeous and perfectly evokes the period and exotic setting, possibly making this one of the most beautiful Holmes films ever produced.

The DVD is loaded with extras like interviews and behind the scenes sequences, but unfortunately these are not subtitled and only available with the Portuguese language track. Hopefully, a North American release will be forthcoming at some point as this film deserves to be seen by a wider audience.

Posted by Charles Prepolec at 11:04 AM