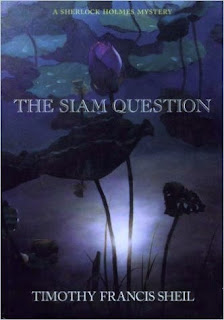 To begin, I must comment on the physical nature of the book itself. This is a rare and fine example of quality book design. Clearly a good deal of thought and attention was given to the overall form of this publication. A rather muted dark blue dustjacket covers a full leatherette binding with a gilt stamped floral design on the front panel. A very nice touch when compared to the usual publishers’ output; which generally exhibits the aesthetic creativity of a, less than well planned, cardboard box! More importantly the book is bound in such a manner that it can be laid flat without causing the binding to crack, a necessary feature as the book is over 600 pages in length and weighs in at about 4 1/2 pounds. I only mention all of this as it is so rare these days to see such thoughtfulness applied by the publishing trade. I am genuinely impressed with this Camden House publication, which incidentally was formed by the author.

The story itself is yet another pastiche that explores the doings of Sherlock Holmes during that intriguing period known as the Great Hiatus. Clearly the remarks made by Holmes to Watson, explaining his activities after his supposed death, offer a great temptation to the writer who wishes to legitimately place Holmes on foreign soil.


"I travelled for two years in Tibet, therefore, and amused myself by visiting Lhasa and spending some days with the head Lama. You may have read of the remarkable explorations of a Norwegian named Sigerson, but I am sure that it never occurred to you that you were receiving news of your friend. I then passed through Persia, looked in at Mecca, and paid a short but interesting visit to the Khalifa at Khartoum, the results of which I have communicated to the Foreign Office."


That description is essentially the basis for the current volume and the forthcoming second volume as well, which is to be published as The Holmes Report Vol. 2 - The Egypt Question. A second quotation is also a contributor to the contents of the present volume. It is made by Mycroft Holmes:


"In the present state of Siam it is most awkward that I should be away from the office."


- The Adventure of the Bruce-Partington Plans


It is this statement which gives the author (a resident of Thailand) an excuse to bring Siam into the narrative. A thin reason, but one that helps to authenticate the major plot points. Happily, it all hangs together rather well.


The story opens on April 6, 1894, the morning after Colonel Moran's botched attempt on Holmes' life. A letter is received from Moriarty's brother and Holmes is called in on a rather too grisly and graphically presented murder case. In the midst of all this, Mycroft calls Holmes and Watson in to a meeting. During the course of the meeting, it is revealed that Sherlock had spent his time during the hiatus, in the service of Her Majesty's Government, under specific directions from Mycroft. Fortunately for the reader, Holmes had a companion during his travels who kept extremely detailed journals of their doings. The companion was the French detective Francois Le Villard, who is casually mentioned in 'The Sign of Four' as having translated some of Holmes' monographs into the French language. Mycroft's commission for Watson is to draft the journals into a cohesive and confidential report for the Government. Thus the stage is set for the dual narratives that make up the book. As Holmes investigates the current murder case, Watson reviews Le Villard's journals. Needless to say, both stories are strongly connected. The use of Le Villard as companion is a good device. He is presented as talented young Frenchman with an interest in rock climbing, which is the reasoning for his being chosen to assist Holmes on his penetration into mountainous Tibet. By using him as the filter through which we, the readers, view Holmes, the author has cleverly managed the feat of describing Holmes in uncharacteristic situations without having to contort Watson's inimitable style. The minor behavioral differences noticeable in Holmes can be attributed to Le Villard's observational ability rather than being regarded as deviations from Watson's own writings, and so manages to maintain a very high degree of credibility. Incidentally, this is a lesson that more writers of pastiches should learn.


The first third of the book (Part One) deals with our heroes’ journey to and adventures within Tibet, which makes up the first of four journals written by Le Villard. Much is made of the political 'Great Game', which is all handled rather convincingly and deals with Russian and Chinese influence in the region. The tone of the entire book is grounded in this sort of 'real world' sensibility. It does take away from the usual 'always 1895' fantasy world that we are all accustomed to, but does make for a more, for lack of better terms, gritty and realistic read. Unfortunately, the purpose for visiting Lhasa is thin at best, and doesn't seem worth the trouble. As our heroes leave Tibet, moving towards Turkistan, they manage to sabotage a Russian weapons factory and become involved with a great little save-the-princess-bride-from-slavers scenario. A few minor adventures ensue, but the first journal ends in the Spring of 1892, just as Holmes and Le Villard are about to head off to Mecca. The journals continue with the fourth volume, which takes place in Siam in 1893, leaving a one-year gap, and two missing journals. The gap is to be filled in the second book of The Holmes Report - The Egypt Question.


Meanwhile, back in 1894 London, we have Holmes and Watson pursuing the now escaped Colonel Moran and investigating what appears to be a resurgence of the Moriarty gang.


The remaining two thirds of the book (Part Two) takes up Le Villard's fourth journal and the narrative of happenings in Siam. The author clearly has a strong interest in Siamese history and culture, as he spends much more time in this setting than in Tibet. A very rich and detailed picture of the Siamese backdrop is presented to the reader. Much of the political nature of this section deals with Siam's attempts at maintaining independence in the face of French and British colonial expansion. The subplots abound here and became quite complex as Holmes is faced with protecting the Leading Adviser from assassination threats, the unexpected reappearance of Irene Adler and Godfrey Norton and Le Villard's romantic entanglements. During all this, Holmes has time to learn something of the art of Thai boxing (kickboxing) and manages to get a tattoo as well. Airguns, bombs and a hunt for the Great Mogul diamond also figure in the narrative. Sounds faintly ridiculous, but the author weaves it all together in a fairly interesting manner. All this is also tied into the doings of Moran and a world conspiracy involving the Moriarty gang. At the centre of all the intrigue is the rather pathetic figure of Godfrey Norton. We are clearly in deep waters here...


From Siam, Holmes returns to London on the heels of Godfrey Norton, which brings us full circle to the beginning of the book.  At this point all the loose subplots are drawn together in a somewhat more traditional fashion. Watson is once again the primary voice and all is revealed…but not by me!


After investing in 603 pages of story, I can say that the book is a worthwhile read. A very different sort of pastiche that has me looking forward to the publication of the second book. My only real complaints are about the previously mentioned lack of good reasoning behind the Tibet sequences and the somewhat overwritten style of the author. Frankly, a stronger hand in the editing stage would have been welcome to this reader. Still, a fantastic book for a first time author, and a wonderful addition to the pastiche shelf.

Note:  Sadly, as of 2016 a second volume has never been published.

Highly Recommended!
Posted by Charles Prepolec at 11:52 AM