BOOK: THE CHILDHOOD OF SHERLOCK HOLMES: THE BUTLER'S TALE 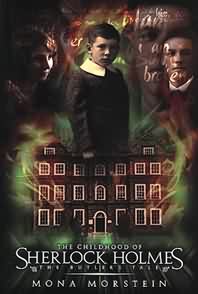 The wild and wonderful world of pastiches can be a very repetitive place. We’ve seen it countless times and are now quite familiar with the standard drill…relative discovers long lost unpublished manuscript of Dr. John Watson. Now the story can finally be told…blah, blah and most emphatically blah. Once again we end up wading through an author’s off the mark attempt to give voice to dear old Watson, and once again we give up in despair when we discover that yet again we are facing an author who can’t find their own voice, much less give voice to our old favorite…shaking our collective heads, we vow to stop reading these shallow imitations. Then, and only rarely so, we find the one that stands out as being different, charmingly written and best of all…interesting!

Mona Morstein’s The Childhood of Sherlock Holmes: The Butler’s Tale is one of those rarities. Yes, there is a long lost manuscript…but surprise, it’s not a Watson MS. As a matter of fact Watson is barely mentioned at all in this book, and Holmes? Well, he’s been reported dead at Reichenbach.  The manuscript is actually the work of one Josiah Cobbett, crime reporter for The Guardian. Cobbett has set himself the daunting and dangerous task of documenting the elusive childhood of the great detective. After reaching a dead end with both Watson and brother Mycroft, Cobbett gets his first break from Wiggins and heads north to the Yorkshire riding of Wensleydale. There he discovers a village bound to silence by a strange and curious pact. After some careful legwork in the local pubs he discovers old Percy Brewster, who was butler to the Holmeses of Hillcroft House, and he is ready to break the pact and tell his tale. At this point we leave Cobbett’s quest and instead read the butler’s story of those remarkable Holmes boys and their family history.

Mona Morstein has my admiration for actually stitching together a coherent and perfectly acceptable background for the Holmes family that embraces, without contradicting, the scant clues to be found in the Canon. She manages to present a fairly believable back-stories that seek to explain Holmes interest in crime, the violin and chemistry. An attempt, if not wholly convincing, is made to illuminate the formation of Holmes’ later opinions of the fairer sex. We are also given a rather good look at brother Mycroft and the specifics of his relationship with his younger and more outgoing brother. Quite frankly I found the Mycroft elements far more intriguing than the story of young Sherlock. The family story is a tragic but gripping read that is told quite well and utilizes a solidly Victorian vocabulary without seeming too overdone or labored. Full marks are awarded on the readability scale!

The main difficulty I had with the book has to do with the remarkably early development of the Holmes boys. Yes, it is safe to assume that the boys were fast learners and exhibited amazing ability at an early age, but Morstein goes somewhat too far in this direction. There is almost a supernatural feel, particularly to Mycroft’s early abilities that unfortunately just doesn’t ring true. My only other problem has to do with the fully-grown Mycroft and his vast influence and power. While Mycroft has been called “the government” I do find it a bit much to see him exercise his powers for such personal reasons and in such a sinister fashion as presented in this book. Still, it is but a minor point and didn’t destroy the tone of the novel.
In the end, I wasn’t disappointed with The Childhood of Sherlock Holmes. Frankly it stands as the best pastiche I’ve read since The Siam Question and goes one step further for taking on the challenge of exploring what is essentially new ground. Now all I wonder is if/when we can expect Mona Morstein to give us her detailed version of what happened with the youthful Sherlock between the main narrative of the current book and his arrival on the scene in A Study in Scarlet? I, for one, would enjoy reading that story…

Posted by Charles Prepolec at 11:23 AM